"From Deep Space, The Seed Is Planted"

Philip Kaufman's 1978 remake of the sci-fi flick Invasion of the Body Snatchers, the original being from 1956, is a big favourite of mine. Not only has it got a young Goldblum and Donald Sutherland with a ridiculous perm and moustache, but it achieves what perhaps more scary movies, sci-fi or otherwise, should aim for; chills and horror without blood and gore.

To paraphrase my old buddy Sigmund Freud, the Uncanny is that which ought to have remain hidden, but which has come to light. Freud being who he was and more importantly interested in the things he was, this is obviously going to end up being about genitals in some way (who says critical theory is boring!?). One of man's biggest fears (if we ignore for a moment the castration and all that – we'll get to that soon enough), according to Sigmund, and the ultimate in uncanniness is being buried alive. But not for any of the obvious reasons, such as suffocating and suffering a slow and painful and claustrophobic death. That would be silly. The reason why this scenario appears to men to be one of the most horrific and uncanny scenarios possible, is because it would remind the victim of the experience of being in his mother's womb before being born. It's been too long since I've actually read this stuff for me to go into any greater depth at this moment, but my point is this: pre-birth, and birth, and maternal insides and genitals, are pretty creepy! Theoretically speaking of course, but I'm always speaking in theoretical terms.

So what could be creepier and more uncanny than seeing yourself, as a grown-up, being born from an alien pod which represents your mother's uterus? Probably not a lot. The alienness of said uterus, and vagina (oh yes, they are quite visual) would of course symbolise woman's Otherness because in case horror films have taught you NOTHING, women are like, well icky. 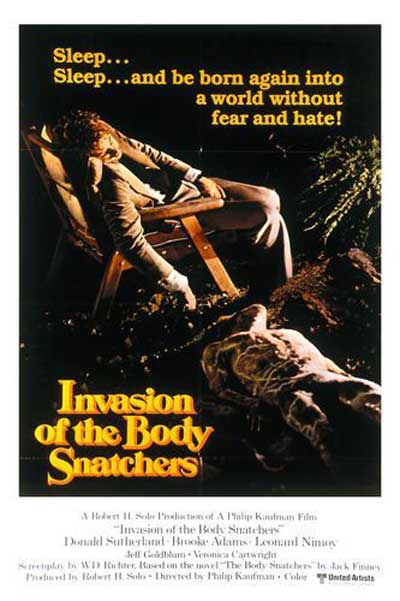 As Barbara Creed (amongst many, many others) points out (specifically in her essay on psychoanalytical views on horror films, Horror and the Monstrous-Feminine: An Imaginary Abjection (1986)), there is a significant tradition across various academic fields for pointing at the ways in which a woman is different from a man in order to explain why she is "shocking, terrifying, horrific, abject". To illustrate this, Creed brings up examples which should be well known to anyone with a slight interest in the topic of psychoanalysis (extremely simplified here by yours truly):

In light of this, what can be said about the uncanny terror of Invasion of the Body Snatchers? Well, for a start, it could be argued that the whole scheme with the alien pods which produce clones of human beings is merely an extension of Freud's three horror scenarios as outlined above. What they all have in common is an immense fear in the man of losing his masculine authority – more or less physically or symbolically, depending on which theory you pick as your favourite. In Invasion…, we see what could happen if these fears were to come true; repoduction without any male input (he he). Sure, the alien plants send out those weird, furry feeler things to get a "blueprint" as it were from both men and women. But the men are not required to take any active part in the process. It is the alien pods, which as I have mentioned are pretty obvious representations of female reproductive parts, that do all the work and take all the initiative – it all happens outside of the control of the man. As if that wasn't bad enough, the clones claim to have it better than their fully human, half male predecessors! What on earth would Freud say? Actually, he probably wouldn't say much, as he would have been busy having a heart attack (I love you, Sigmund).

Furthermore, one of Creed's central themes is the role of the abject in horror. If I might be so bold as to quote Wikipedia, seeing as no one's going to mark this, the abject is "exists in between the concept of an object and the concept of the subject, something alive yet not". [my italics] Creed mentions traditional monster figures such as vampires, ghouls, zombies, and witches as examples of "bodies without souls", and even werewolves as an example of a "collapse of the boundaries between human and animal". In Invasion…, the thing threatening to collapse the boundaries of safety is not animal, but alien. Thus, we can say that there is a collapse of the boundaries between, or the very categories of, human subject and Other. The problem here of course, lies in the customary definition of the "universal" (a term which loses even more of its meaning in confrontation with aliens) human subject, which again and again turns out to be a very small part of the human population. Women, for example, traditionally speaking have no place within the definition of subject. So once again, what we are dealing with is a male ("universal") fear of losing control; women, aliens, Others are threatening to take over authority. The boundaries that are collapsing might as well be between the genders.

"the concept of a border is central to the construction of the monstrous in the horror film; that which crosses or threatens to cross the "border" is abject. Although the specific nature of the border changes from film to film, the function of the monstrous remains the same: to bring about an encounter between the symbolic order and that which threatens its stability".


She goes on to list different kinds of films with different kinds of borders to be crossed; human/inhuman in one category, genders in another (and even "normal and abnormal sexual desire" as a third category). What I'm suggesting here is that in seperating the categories in such a way, Creed is missing a vital point. The same threat could easily be represented in an infinity of different ways, without changing the fact that the threat itself does not change because what is being threatened remains the same. The "symbolic order" which is so loved by several psychoanalysts is unflexible at best, yet it continues to inhabit one of the most dominant roles of all in popular culture. Meanwhile, the way I see it, one important question remains. Creed touches upon it, though she formulates it in a different way from what I would prefer: "Is it possible to intervene in the social construction of woman as abject?" Luckily, seeing as this is my blog, I get the last word: once we have identified the problem as being not necessarily the representations of women as abject, but of the never changing symbolic order which is being forever threatened, what can we do to turn this insight to our advantage?

But ahh, had it only been that easy – because I just outlined an "us" which would necessarily define a "them" and thus construct even more borders and boundaries to be threatened and defended. Such is life, perhaps?
Posted by Helene Aalborg at 00:08 2 stabs