Stay away from her, you bitch!

Having fallen instantly and absolutely in love with Alien (1979) upon first watching it about a year ago, I was pretty excited to move on to the sequels when I found them all in one handy little box set. Especially the first sequel, Aliens (1986), was something that had me quite excited as I had encountered so many people listing it as one of their favourite films, ranking it higher even than the first film. 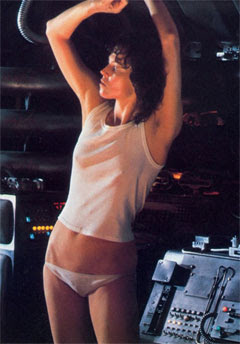 Since actually having watched it and made some throwaway remarks about it online though, I've realised just how divided opinions really are on this. The people who prefer the 1986 sequel are, like the film itself, louder and more in your face. In a sense I think that Aliens follows more of the kind of self-referential slasher mentality or even tradition that I mostly love, despite it being seen as wankery by a lot of people. But its predecessor has that other thing that I generally value above most other things in a horror/slasher flick: some degree of subtlety. To me, Ripley calling the egg laying alien a "bitch" is too much like the A-Team remake of 2010 in which Face is suddenly a loud and crude character who goes around calling people motherfuckers. It's uncalled for, it adds nothing to the film (apart from the occasional giggle from someone or other in the audience) and more than anything, it seems a bit stupid. Granted none of this is as bad as the Texas Chainsaw sequel, but I'll have to get back to you on that one later.

The main issue with Aliens though is, not surprisingly, Ripley herself. In 1979 she was cool as fuck because she didn't live up to the final girl stereotype (although obviously still very much filling the role). I'm not going to go into here if I think that the reason for that, ie. that Ripley was written as a man originally, is a Good Thing or a Bad Thing but it certainly made things a bit more interesting. The Ripley of 1986 however tries her very best to make up for that. Sod the fucking cat, bring a real life kid in and force that maternal instinct out until there's not much else left of her, and just in case the point should still be lost on some, land her right in the middle of a good old bitch fight with that alien queen bee. WOMAN WOMAN WOMAN.

I'm betting that Carol Clover with her whole theory of fluid/shifting identifacations in horror audiences will have had something clever to say about this, but for now I have no fancy quotes to round this off. In fact I have nothing at all to round it off, apart from something like "sequels, eh? what a load of shit."
Posted by Helene Aalborg at 15:30