Insidious: Chapter 2 (2013) and the rareness of tangible horror

The official opener of this year’s edition of Ramaskrik, the prime Norwegian horror film festival, was James Wan’s sequel to his 2010 hit screamer, Insidious. I have not actually seen the first movie, but I did not at any point feel that my lack of knowledge of the first film left me in the dark. I definitely want to see Insidious at some point too, to see if it makes me think of its sequel any differently. Anyway – please just have in mind when you’re reading this that I haven’t seen the first one, and also please don’t spoil it for me in any comments.

Ok. So. Insidious: Chapter 2 is a take on the classic haunted house story we all know and love. This is one of the first types of scary stories we become acquainted with as children, as we lie awake wondering what’s hiding in the closet, or trying to scare our friends into a similar predicament. So there’s no surprise that there are so many horror movie riffs on this theme, one of the most well known being the classic The Amityville Horror (1979, remade in 2005). One of the strengths of this sub-genre is the mere fact that it’s such a well-known theme, and one that everyone can relate to. Being afraid of those eerie sounds your house makes when you’re home alone on a dark night, not to mention the shadows creeping across the hallway, is something that everyone who has ever lived in a house can relate to. First, there were monsters in the woods; now, there are monsters in our houses.

In order for a haunted house-horror to actually work as a scary movie, it needs at least these two things: 1) an awareness of how many times you can have someone suddenly appear behind a closing door or in a mirror before it gets old, and 2) a mysterious or complex enough monster/source of horror to keep the viewer interested in one single location for the duration of a feature film. I am a big advocate for the subtleties of horror, of the ever-fading art of not making everything so god damned in your face and obvious in every single horror flick. Sure, you need the jumps and goose bump moments in movies like these, but to the human mind, the unknown is the very scariest thing there is. Which is why horror films that hint at the source of horror and leaves the rest to your terrified and paranoid mind to work out in gruesome detail, are normally the ones that can properly get under your skin. Insidious 2 handles the hinting and the mystery fairly well for a while; however, this is one of those rare movies that left me scared and at the edge of my seat even once the source of horror was fully revealed and we got a good, clear look at it. That, to me, is no small feat. Most movie monsters lose a lot of their power to scare you once you get a good look at them. Creepy woman ghost in Insidious 2? Only gets scarier. 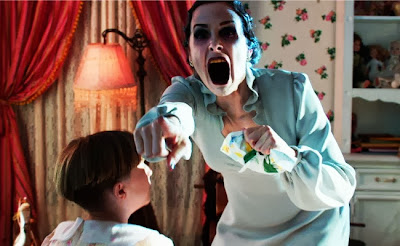 I will give away a lot of spoilers, like details of the source of horror and who and what and why, so if you don’t want to know those things, you should come back after having seen the film. Otherwise:

We meet Mrs. Lambert and her son Josh in the early 1980s. They obviously live alone in a huge, old house. On the night that we first meet them, they receive a visit from one Elise Rainier, an expert in communicating with spirits and that sort of thing. Young Josh has been having a lot of bad dreams since they moved to this gigantic, dark house (imagine!), and his mother has noticed something weird in pictures of him: there seems to be some sort of dark figure following him around, moving in closer and closer on the young boy. Elise hypnotises Josh to tap into his mind and figure out what is going on and how much he actually knows about what’s happening to him. Josh tells Elise that the dark figure is a woman, who claims to be a friend. Elise goes searching around the house and finally finds something in the closet in Josh’s room, and as she tells Mrs. Lambert: “it is not a friend”. The thing, spirit or whatever it is, is apparently a parasite that wants to be Josh. It has come into contact with him because Josh possesses some kind of special power that allows him to see the dead in his dreams; trouble is, now one of them has seen him. And it doesn’t want to play nice.

Mrs. Lambert begs Elise for help, and they decide that Elise will try to remove (or at least reduce) Josh’s creepy ability and try to make him forget what he’s been through. Really, an incredibly malicious ghost is hunting your schoolboy son and you just want to make him forget that it’s there!? Oh well, we wouldn’t have many horror movies without people making a lot of rash and stupid decisions.

Apparently, this scheme turned out surprisingly well, until one day when Josh is a grown man with a family of his own, and one of his sons has drifted into a coma where he hangs out with dead people or something, and Elise has helped Josh go into the spirit world to get his son back. From what I gather, this was the main plot of the first film? Anyway, when Josh comes back from the dark side, Elise is dead, and what his wife Renai describes as “weird things happening around the house” just keep on happening. They go back do Josh’s childhood home to stay with his mother while the police investigate Elise’s death. Meanwhile, it soon becomes clear that whatever is haunting the Lambert family is not confined to a single, physical location – as some ghosts are. Before long, the weird shit gets out of control, and Renai and Lorraine (the older Mrs. Lambert) become aware of certain changes in their beloved Josh. Lorraine suspects that it might literally be old ghosts come back to haunt them, but because of Elise’s memory erasing all those years before, it’s difficult to tell for sure.

Elise’s assistant through many years, as well as a pair of newcomers to the whole spirit communication business, take it upon themselves to figure out what is going on. They team up with Lorraine and they end up at an old, abandoned hospital where Lorraine used to work back when Josh was an innocent, but oh so troubled kid. She recalls one patient she had, Parker Crane, who had been submitted to the ICU after trying to castrate himself. Freud ahoy, people! They continue to his old home and surprise, surprise: something bad is there. Turns out the bad thing is, SPOILER SPOILER, Parker’s completely fucking psychotic mother, who could never accept the fact that she had given birth to a useless son instead of an adorable little girl to dress up and have play with dolls and all that. So she just pretends that little Parker is a girl, calls him Marilyn and threatens him to accept the role, slaps him around for no good reason and is generally just a creepy as fuck bad bitch. 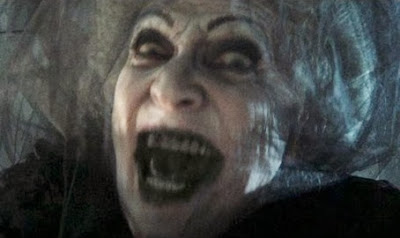 Believe it or not, Parker Crane did not turn out a normal person. Instead, he ended up killing a lot of young women (because his mummy told him to), and then lined up their corpses neatly in the basement of the house. He wore a black bridal dress while committing the murders, as a kind of disguise – and obviously very in line with the inherent gender confusion theme. Years after his death, Parker came back as a parasitic spirit who wanted to take over young Josh’s body to experience a childhood he never had. When that didn’t work out, he waited in the dark, and came back for grown-up Josh after he crossed into the spirit world to find his son (stay with me, now). He wants to be alive and part of a normal family. Trouble is, mummy dearest is still very much in control of him, and tells him that if he wants to stay alive he has to kill everyone around him. He doesn’t want to, but then teeth start falling out and Josh’s health generally deteriorating; and on top of it all, Elise’s assistant and his apprentices come after him. Let the killing begin.

In this way, Insidious 2 combines two age-old horror themes: the haunted house, and the unhealthy mother/son relationship. Luckily, the filmmakers have been clever enough to not rely too heavily on too many special effects when creating their ghosts, so that they remain scary even up close. Mrs. Crane is the scariest of all, with her white skin, black eyes and not even one tiny redeeming feature. We are shown flashbacks to her so called parenting methods when raising Parker, and it becomes very clear that this woman was not only made evil after her death.

Gender confusion is, as mentioned, a classic horror theme. Look no further than to Mr. Ed Gein, inspiration for a huge variety of classic horror movies including Psycho, The Texas Chain Saw Massacre, The Silence of the Lambs and many more. Little boys with dominant mothers apparently have little other choice than to turn out mentally disturbed serial killers – especially when they stay with their mothers as grown-ups, in the mothers’ twisted, isolated fantasy worlds. This is not so much Oedipal as it is an expression of fear of generally dominant women, which is a recurring motif in a broad range of popular culture. And in many ways, this represents what I base my objections upon when it comes to female (and some male) horror film critics and theorists who call out for more female horror villains. We already have the Final Girl, which is way more awesome, so do we really need to portray more women as monsters in the name of equality on screen? 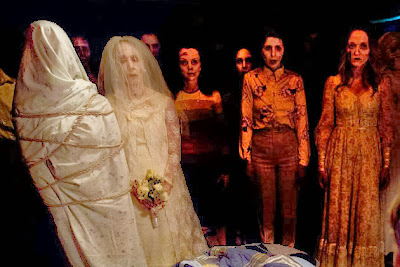 However, subversive gender roles is mostly a good thing if done well, and often calls for a more interesting movie experience. And even though Insidious 2 isn’t really huge on conscious gender politics and symbolism, other than using gender confusion as an explanation for the source of horror (let’s leave that one for someone else to handle), its evil characters are really well done. They manage to be pretty in your face without being over the top – and that is a difficult balance in horror films. It’s pretty rare these days that I get genuinely creeped out by a scary movie, but throughout this one I was jumping in my seat, getting goose bumps up and down my arms and legs, and felt my heart race more than once.

If you’re looking for something new to watch this Halloween, in other words: look no further. Prepare to get scared.
Posted by Helene Aalborg at 18:27