Women in Horror Month – An Interview

Luckily, I am far, far from the only person preoccupied with the gender dynamics of the horror genre. I constantly discover new and different approaches that people are taking to this, in my obvious opinion, endlessly fascinating and diverse subject.

And thankfully, not all of those approaches are as abstract and theoretical as mine.

A while back, I discovered a page on Facebook called Women in Horror Recognition Month. I immidiately followed it and noticed that they were posting a lot of cool links, but I didn't really know anything about the people behind it or if there was anything more than a Facebook page (granted, I could have easily figured that last one out on my own if I hadn't been so lazy). So when the team over at the Norwegian site I write for, Filmamasoner, were putting together a series of articles, reviews and interviews for Halloween about feminist approaches to horror, Women in Horror... was one of the first things to pop into mind.

Below is the full and (practically!) unedited interview with the lovely Hannah Neurotica, the wonderful brain behind the initiative. You can tell by some of the questions (and their answers) that this was meant for an audience who might necessarily not be hugely into horror, and that it was meant to be published pre-Halloween, but everything that Hannah says is still relevant and pretty damn interesting. 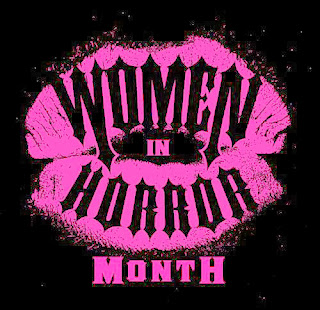 First of all, what is WiHM?

Women in Horror Month (WiHM) is an initiative to recognize women in all facets of the horror industry (film, visual art, writing, theatre, etc) from around the world. WiHM wouldn't exist without those who create film festivals, podcasts, blogs, donating blood, and other creative mediums to showcase women's contributions to the dark arts. Our organization helps foster and promote events, it's so exciting to what DIY events (online and on land) people develop each year in there own communities. Our goal as an organization is to assist underrepresented female genre artists in gaining opportunities, exposure, and education through altruistic events, printed material, articles, interviews, and online support. Anyone, anywhere, can take part in this celebration.

How did it all start, how did you get the idea for this project?

The idea came to me while sitting on my couch feeling frustrated and exhausted by the outcome of an interview I'd done that week with CBC radio. It was just the tipping point for me & my anger about the horror industry (well, the entertainment industry in general) continually ignoring women's contributions and treating female horror fans as an anomaly. I was upset by lack of visibility, lack of opportunities, and rampant assumptions about the relationship between women and the horror genre both as artists and consumers.

I'd been making Ax Wound: Gender & The Horror genre for years at that point and it felt like a natural progression. As they say: if you are not happy with something going on in the world, then do something, don't just complain. You don't have to lead a revolution or part the sea – just start a conversation with someone. That is a huge step. Right now is an amazing time: there are endless platforms for innovative social change. Get creative. Don't be afraid. If you are sick of being marginalized I guarantee you are not alone – you don't have to be. They key is community and supporting each other. Reach out to people. Drop your ego. Focus on the cause with genuine determination and passion – that is something others will want to be part of too. 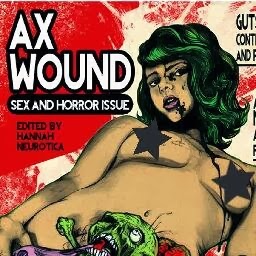 What are your feelings about the Final Girl concept? Who is your favourite (or least favourite!) Final Girl?

Carol Clover's book "Men, Women, and Chainsaws" was pivotal to film/gender studies discourse. Her observations inspired academics, film buffs, and eventually lead to the genre being more self-aware (mainstreaming the concept) with films like Scream, The Rise of Leslie Vernon, Cabin in the Woods, etc. So, on its own the concept/book is something I respect deeply and should be respected as a serious contribution to film theory. I even have a tattoo that says Final Grrrl on my wrists because to me, it represents overcoming odds and survival. Does that mean I think that her book was a perfect reading of slasher films with no room for further exploration? Of course not. The book is very Freudian and she openly states in the introduction that the book was written with the male spectator in mind. I would love to see her write an updated version considering the self-awareness that exists right now as well as the changes in what the Final Girl is allowed to partake in, yet still reign supreme. 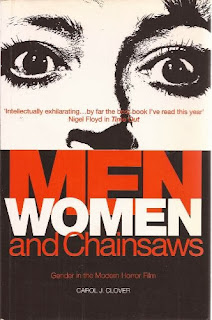 I guess what I am saying is I don't get how the concept can be something one "likes" or "dislikes." It's an observation that had huge impact on the way we look at and study horror films. I think people who are turned off when they hear the word are probably just assuming that a final girl can't evolve or don't view it for what it is. She has gone from virgin to druggie – but she still remains "final." Again, all interesting things left to explore. Nancy from Nightmare on Elm Street is my favorite always. I view the Final Girl concept as an entry point of study with much more to build on.

There are genre critics who claim that the horror genre is inherently misogynist. What is your message for them?

It depends if we are talking about the horror film industry or the film characters themselves. The genre is no more misogynist then any other genre. Romantic comedies.... Need I say more? I do think horror actually has the capacity to explore social issues in a way no other genre can. As for Hollywood – there  is this rumor going around that vaginas behind cameras will bring on the apocalypse. I think we can prove them wrong, and we are making small advances, but we have a long fucking way to go.

Yes, in the sense that human beings view everything in life from subjective experience; that which would be influenced by gender, sexuality, culture, socioeconomic status, life experiences. From my observations the biggest point of disconnect between genders when viewing a horror film involve the usage of graphic rape scenes. This is something one could assume would be a subject that women will have a different reaction to based on the sick statistics of violence against women being such an insidious and rampant reality. Of course this is a very general response.
Aside from viewing – I think an exciting aspect of seeing horror films that are made by women is that fresh perspective of fear that men wouldn't think to explore in certain ways because its not part of their daily reality.

Who is your favourite Woman in Horror?

I suck at pinpointing a favorite film/book/anything so a person is off the charts impossible. One of the aspects I love about WiHM is meeting so many amazing women working in a wide array of creative modalities - all with something unique to contribute that as a whole form this sense community.

So I can't say a favorite but I can say the type of women I love most are those who are not afraid to speak out, be creative, and who don't build their sense of self off unessasary competition or belittling of other women. We need to get rid of this fear that the success of one woman somehow translates to less success for us. It's quiet the opposite. There is room for all of us to reach our goals and the best way to make it happen is building each other up – something women generally speaking don't seem to be the best at in practice.

The paradigm we live in thrives on keeping women from getting along – imagine how crazy awesome shit would be if we flipped that? So a favorite woman in horror would be one who views other ladies success as a step in the right direction and not a personal attack to their own career. Off the top of my head some examples would be Jen & Sylvia Soska, Jovanka Vuckovic, Karen Lam, Jennifer Lynch....

Finally, if you could recommend three horror films for our readers, which would they be and why?

Hmm... Oh man, I can only pick three? I suck at these questions too. Okay well, most recently I have been telling my friends to check out The Bay. It is one of the best examples of how to do a found footage and still make a high quality/watchable film. I think I have watched it five times on Netflix.

American Mary is a great one written and directed by Jen and Sylvia Soska. It's a beautifully shot dark film. Carnival of Souls (1962) – if you haven't seen that then you need to stop what your doing right now and put it on (no, actually, wait until Halloween) that would be perfect for Halloween. It's creepy as fuck. Also, if you want to watch short films, features, and trailers of films written and/or produced by women I have been working on this ongoing collection here: http://womenmakehorrorfilms.tumblr.com/

This is by no means a reflection of all that is out there. In fact, this is just a tiny miniscule example and there is more and more being added all the time. There are also some features directed by women coming out soon which I can't wait to see like Evangeline (dir. Karen Lam), DYS (dir. Maude Michaud) among many others.

A Norwegian translation of this interview can be read at Filmamasoner.no.
Posted by Helene Aalborg at 08:17